Perhaps because of the events, the Egyptian fans forgot the name of Betsu Musimani, the coach of South Africa, which caused him to miss the 2012 African Cup of Nations. But they knew him well in 2016.

Fate led Mamelodi Sundowns to the quarter-finals of the African Champions League after a fatal administrative mistake, the Congolese Vita Club, expelled them from the tournament and brought the South African team back to life.

Before his confrontation with Zamalek, Musimani had played against the same team twice in the group stage, winning 1-0 and 2-1. Then he won the first leg of the final 3-0 and lost in the second leg 1-0 and has not played against him since then.

Who is Betso Musimani, the most prominent candidate to take over Al-Ahly training, succeeding Renee Fyler?

The former Super Sport United coach began his journey in the world of coaching quickly after retiring from football. Musimane was a midfield player and international, like the Sundowns twice, and he also played for Al Sadd Qatar before his retirement.

After the start of his coaching journey at SuperSport United 2001-2007, he assumed the assignment of the South African national team assistant for 4 years since he was coach of Super Sports from 2006-2010, then he led the national team for two years.

To refresh the memory of the Egyptian masses, Musimane took over as coach of South Africa temporarily during 2006 while searching for a new coach before the appointment of Carlos Alberto Pereira.

Musimane led the national team in 7 matches during that time. Most notably for us, the friendly match against Egypt in November 2006, which the Pharaohs won 1-0 at the time, playing 4-1-2-1-2.

The South African coach faced Egypt twice after 5 years when he led the South African team as a permanent coach. At that time, Egypt was in the same group with South Africa, winning the first leg 1-0 and tied backwards.

In the match that the Pharaohs lost, it was Hassan Shehata, the legendary coach, who led the national team and the formation was as follows:

And participated from the bench, the trio of Muhammad Zidan, Muhammad Naji Gedo and Muhammad Abu Trika.

In the goalless match the formation was:

His first confrontation with Al-Ahly with the Sundowns bore a very painful memory, 5-0 as the biggest loss in the history of the African club in the 2019 Champions League quarter-finals, in addition to two 1-0 losses in the same year. Then, during the current tournament, when Al-Ahly eliminated him from the same round with a 2-0 victory, then a 1-1 draw.

How did Mosimane turn Sundowns into a contender for all titles?

Immediately after taking over, Musimane began getting to know his team little by little, and since then the team has been indomitable with the South African coach.

Sundowns hadn’t won any championships for 4 years and when Mosimane took over the task his main goal was not to relegate the team because he finished the 2012-2013 season in 10th place with 39 points.

In the 2013-2014 season, the team signed with players such as Rashid, Somalia, Khama Pelat and others, nearly 13 players, and after that he had a great season, as he was 10 points away from the leaders Kaizer Chiefs, but the team continued its quest and won the title, to be the perfect start that followed after Achievements.

Luck played a big role with Sundowns, who had bid farewell to the tournament for losing to Vita Club on the away goal base after a 2-2 draw, but Vita involved an unregistered player in the first round, to qualify for Sundowns after he had already played a round in the Confederation Cup qualifiers.

Sundowns were in the group, Zamalek, Enyimba, and ES Setif, winning back and forth against Zamalek, and ES Setif were excluded after storming the stadium and other incidents in their match against the Sundowns.

The South African team faced ZESCO United in the semi-finals and overcame them, while Zamalek overtook Moroccan Wydad, and the two teams met in the final.

Mosimane is a very smart coach who is always good at conveying a different image of his team, while he had built a team dominating South Africa locally, crowned titles and had stars, he was reducing his chances, especially against Zamalek.

One of his statements before confronting Zamalek, he said: “They will definitely win us, when you face a team of its size, you must lose.”

He continued, “To win against Zamalek is like a dream, and I think that all of those present now have the same belief that we cannot win them.”

Musimani’s hope in the confrontation is a rule he made clear to his players: “We have nothing to lose, we have come to look well.”

Then he fought a psychological war in his statements, whether in the group stage or the final, that Zamalek is fully capable of winning.

Indeed, the South African coach was able to win against Zamalek and win the title for the first time in its history, after 15 years of failure on the first attempt.

“I know teams in Africa that respect us because we’ve been around all the time,” Musimane said.

“We now understand North African football very well. My players understand, and I do, but we have to prevail over the situation.” 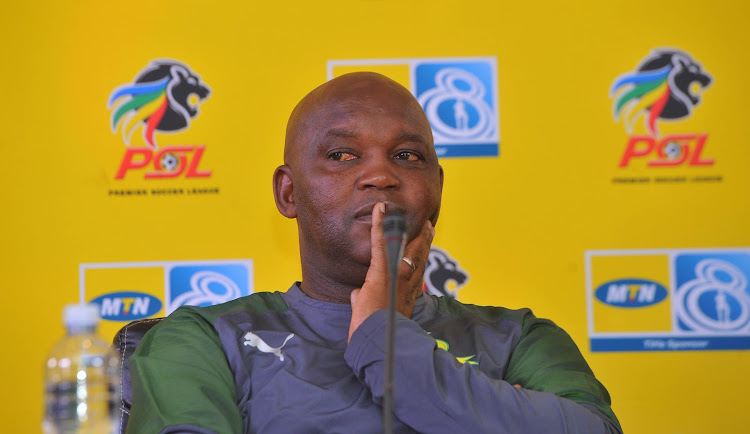 The most crowned teams in the Champions League are Al-Ahly, Zamalek and Mazembe, two of them from North Africa, and what better prove that the North Battalion is not able to outperform the South again except to win whenever you have the opportunity?

Sundowns continued to dominate the major North, Al-Ahly, Zamalek, Al-Tarji and Al-Wadad, but the latter formed a kind of knot.

Sundowns did not win against Wydad in 2017 or 2018 when they faced either in the final elimination matches or the group stage respectively, in the third season, Sundowns broke the knot and won 2-1 in the group stage, but lost again in Morocco, 1-0.

Another moment came to confront one of the Champions League giants, another opponent from Egypt, Al-Ahly, and he succeeded in achieving a victory that he could not have dreamed of, with a historic result, 5-0 in the first leg that would exclude Al-Ahly and it was as the Egyptian team won only 1-0 in the second leg.

Musimane said: “We have to understand very well how to play and face the northern clubs, how to expose them and so far we have not really been able to conquer them as they did.”

“In my opinion, only Mazembe from the Democratic Republic of the Congo in the southern countries managed to do this,” he said.

“Their budgets are 10 times better than us, they have players who have played in Europe, they do not get any coach, but the biggest coaches from South America and the English Premier League sometimes.”

“They pay different salaries and special flights,” he added. “Wydad travels in its private plane. It is a big team, and there is no doubt about that, but that is a different level.”

“Playing in the Champions League is very important for us, it benefits our players, and also benefits us financially because the returns are not small,” he added.

“The northern clubs know very well how to control their system and disturb their opponent. We are strong now. We have more than 5 years of experience in these matters. It is worth knowing how to play this game.”

At that time, Wydad won the first leg, 2-1, and tied in the second leg.

The two teams also faced in 2017 in the knockout stages of the tournament, in the quarter-finals of the Champions League, the Sundowns won the first leg, 1-0, but lost out 4-2.

That is, Sundowns never succeeded with Musimane in overcoming Wydad in the knockout rounds of the African Champions League during two times he faced him.

One of the memorable scenes when Wydad players tried to provoke him during a TV interview, but he was violent and he got out of his feelings in response.

Musimani began his angry speech, “They are doing this for us in Morocco.”

And he continued, “Everywhere they bully us, it happens every time we play with them in the Champions League, we do not even find the boys who bring the ball, will they always provoke us?”

And he continued, “We know what we will do if they bully us, and we will respond to the bullying.”

And he concluded, “They always bully everyone, they do not want to lose, but when we lose, we in Wydad do not do anything we leave properly, what is all this?”

During the year 2019 only, Sundowns faced Wydad in the period from January to December in the Champions League 5 times, winning once, losing twice and drawing twice.

The last two confrontations that brought together Sundowns and Wydad in the group stage of the current edition, witnessed a goalless draw in Morocco and the Sundowns victory 1-0.

In the event that Musimani takes over to train Al-Ahly, and after 3 weeks, he will have a date with two fateful matches and his most prominent files if he takes over the mission, the two Wydad matches on October 17 and 23 of the same month. Two matches will definitely be added to his long record of confrontations against Wydad. Will he succeed this time in breaking the knot of the knockout rounds and snatching his qualifying card from Wydad for the first time?

As a historical fact, if Musimane takes over the job, he will become the first black African coach from the south of the continent to lead one of the top teams in the north of the continent, and that will be a great event in South Africa.

The decider is white .. Zamalek defeats Al-Ahly and is crowned champion of the K League

“Corona Challenge Experiences” … Today, Britain is injecting the virus into the bodies of volunteers (details)

The war in Syria: Russia declares “200 militants killed” in air strikes near Palmyra

FilGoal | News | His agent in the Joule: Ramadan Sobhi Said with Pyramids .. but he wants to end his football...

Video .. How Al-Sakka behaved when the director told him that Amir Karara is Sisha

The water flow rate is less than 10% .. Irrigation illustrates the seriousness of the new step

The Toukh train accident .. Sources reveal the reasons for the installation of “wood planks” in the rails

Do not neglect it .. Learn about the symptoms and stages...

Ali Maaloul scored for the Tunisian team against Sudan with a...

Canada Hanna returns to the cinema with the movie “You Are...

Pyramids tests on Jabr and restore Omar Jaber in the position...