Moroccan Ashraf Bin Sharqi, the Zamalek wing, published today, Monday, the group photo of the team in front of El Gouna, through his account on the social networking site “Facebook”, saying, “A large team”, in his first comment after the incident of his angry departure during the meeting of the two teams, What led to the team’s management asserting that Tariq Yahya, the interim technical manager who led the team in that match, would return in that incident, and if he recommended that the player be fined, it will be signed according to the white team’s regulation. 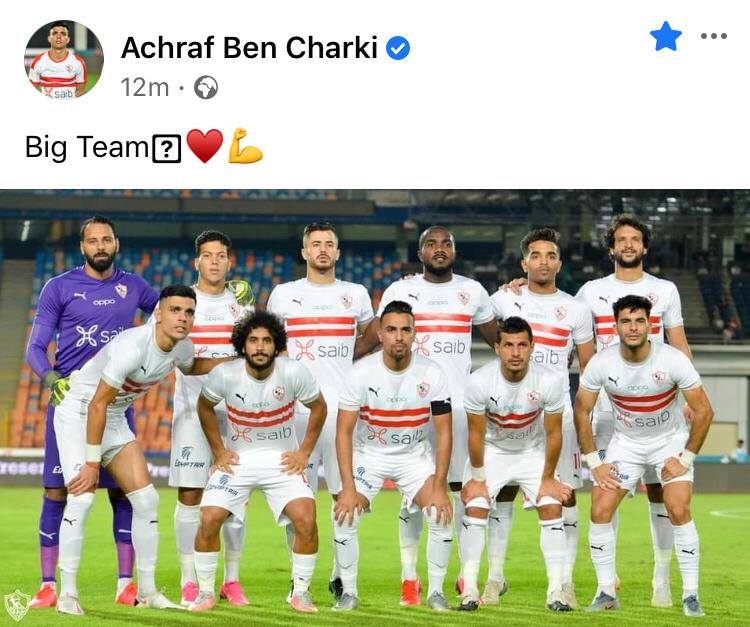 Tariq Yahya, the former coach of the first football team in Zamalek, revealed his club’s position on fining Ashraf bin Sharqi, the team’s player, after he intercepted improperly during the El Gouna match. Fined him, but I will participate in the matches because of his apology. ”

He added, “I am not continuing in my position in order to interfere with the matter of fining the player, and I will not recommend that he be fined or suspended, and this has become outside my powers .. Ashraf bin Sharqi is my friend and my son before he was a player in Zamalek club, and he apologized to me after his objection inappropriately.” Bin Sharqi was angry after being substituted in the second half in front of El Gouna and went to the dressing room immediately after his change.

While the Portuguese coach Jimmy Pacheco, Zamalek’s technical director, set 4:30 in the afternoon, Monday, as a date for the first session under his leadership in preparation for the white team’s confrontation with the Egyptian Port Said, which will bring the two teams together at 8:00 pm next Thursday at the Burj Al Arab Stadium in Alexandria, as part of the thirty-first round of the League competition Al-Mumtaz, who officially won the Al-Ahly title for the 42nd time in its history and the fifth in a row.

Amir Mortada Mansour, general supervisor of football at Zamalek club, revealed the final formation of the Portuguese Jaime Pacheco, returning to lead the team in a second term, which will be composed of Portuguese Pacheco as a technical director and assisted by the bilateral bilateral Alex Costa, the assistant coach, and Jose Pedro, the loads coach, who had previously worked In Zamalek, he accompanied Josualdo Ferreira, the former coach of White, as well as two local assistants, Medhat Abdel Hadi and Amr Abdel Salam, after dismissing the recruitment of Senegalese goalkeeper coach Khadim Fay, who would have taken over the task of coaching White goalkeepers.

Amir Mortada Mansour, in exclusive statements to “The Seventh Day,” said that the Portuguese Pacheco He will take over the first training for Zamalek today, Monday, after officially assuming the task for the team, and the end of the temporary mission of Tariq Yahya, who took over the leadership of the White in the last three matches in the Premier League, starting with the Aswan match, then Tanta and lastly El Gouna, in which the Whites won four goals against three, within the framework of The 30th round of the Premier League competition.

The Portuguese Pacheco and his assistants were present in the Zamalek residence camp before heading to the Cairo Stadium, to play the El Gouna match, where the players and the temporary technical staff of White, led by Tariq Yahya, were keen to welcome him, after his arrival in Cairo, in the early hours of Sunday morning, in preparation for taking over Officially leading the team, he also watched the El Gouna match from the Cairo stadium cabin.

Mohamed Salah and his comrades in Liverpool return to training after...

“Falling stars and a red aura” … Alexandria is preparing for...

Be careful … Corona virus infects children in these cases

Mohamed Salah celebrates Christmas with his family in a rare appearance...

After the number of SARS victims exceeds .. Corona continues to...

A great star, who I apologize for. Karim Abdul Aziz secretly...