Moroccan club Wydad decided to refer its two players, Abdellatif Naseer and Haitham Al Bahja, to the club’s disciplinary committee, on the back of what was issued on the sidelines of the Al-Ahly confrontation in the African Champions League.

Wydad published an official statement in which he said: “Following the accident that the Wydad Sports Club residence in Casablanca witnessed after its match in the CAF Champions League semi-finals, the end of which was known by the dismissal of a hotel employee from his work, Wydad Sports Club decided to refer the file of the player Abdel Latif Naseer to The disciplinary committee to consider this case. ”

He added, “Wydad Sports Club decided to present the file of the player Haitham Al-Bahja to the disciplinary committee, for his immoral behavior against the technical staff during the last match of Wydad Sports Club in Egypt.”

It is noteworthy that Wydad lost at home to Al-Ahly with two goals without a response in the first leg of the Champions League semi-final, before losing (3-1) in the return match in Egypt, to deposit the championship after the defeat in the aggregate of the two matches, with a score of (5-1). 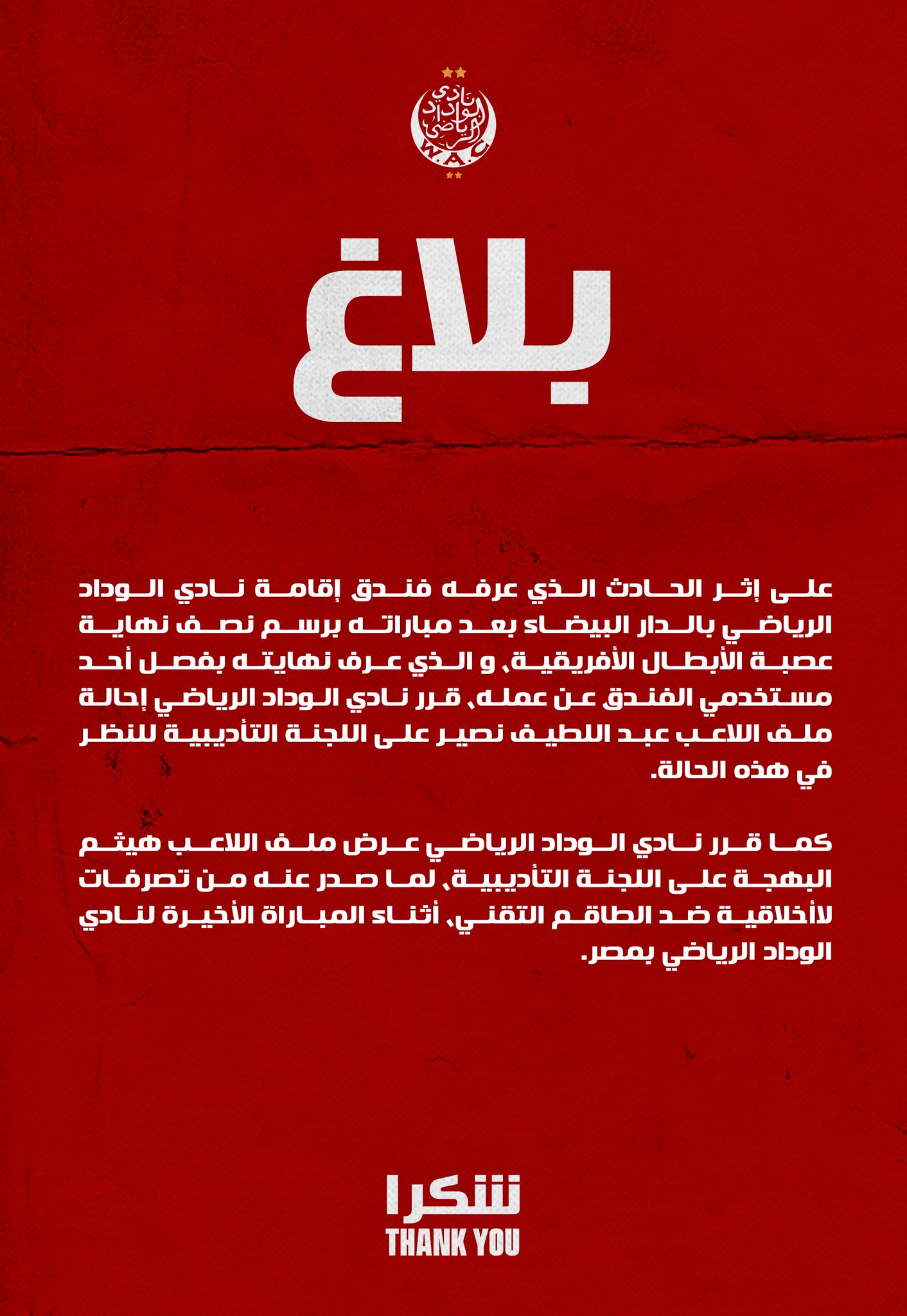 Al-Ahly last dominated Zamalek in the summit matches in Ramadan

Shock .. Real Madrid loses Kroos and Benzema after a week of death in front of Liverpool and Barcelona

Trezeguet for “the seventh day” after knee surgery: “I will come back stronger”

FilGoal | News | Wael Jumaa: How does a “noble player” insult professors with a great history … and I am surprised...

FilGoal | News | Pepe talks about his clash with Mourinho: I just asked that Casillas’ history be respected

The Revenge Cup between Barcelona and Athletic Bilbao is the top headline in the world’s newspapers. Pictures

FilGoal | News | Wael Jumaa: How does a “noble player” insult professors with a great history … and I am surprised...

Adel Imam’s grandson speaks for the first time: “My grandfather is...

Pacheco gives Zamalek players a rest 4 days after qualifying for...

FilGoal | News | Mido: Al-Ahly is the most technically and...

The Minister of Health: A role in each hospital to remove...