Egyptian actress Dalia Mostafa published photos from a filming session inside her home, where she wore her husband, artist Sherif Salamas shirt, and commented on her confirming that her husband would kill her because of her repeated appearance in his clothes.

Dalia Mustafa shared with her fans a picture of her with a casual view from her garden, and commented on it through her account on the Instagram photo sharing application, saying: “What do you think … knowing that it is an honorable shirt and it kills me,” according to (my lady).

The interesting thing is that Sherif Salama intervened by commenting denouncing his “scarf” ignoring, saying: “The scarf is too much for us?” His wife Dalia replied, saying: The scarf is for us all.

Dalia Mustafa admitted, recently that her husband, artist Sherif Salama, does not exchange romantic words with her, because he is not good at expressing his feelings, but at the same time she described him as a jewel, confirming that it is a gift from God, and his temperament changed dramatically after marriage, and he became kinder and more gifted and became better in general.

Dalia added, “Any woman in the world loves surprises, especially from her husband, because it is a nice need and renews marital life very much, noting that she sees that the wife’s presence with her husband alone, far from the children, and any pressures of life work to renew marital life and remove the negative energy and renew it with positive energy between the spouses.” .

And she continued, “Sherif Salama Mabirafish says words of love at all, but every year he says a sentence or word of love for me, but he does not speak about love, and in general he does not know the expression of his feelings, saying:“ Our Lord gave me a jewel embodied in my husband, the artist Sherif Salama. ”

She continued, saying: “I am a person who is very afraid of envy, noting that envy is mentioned in the Holy Qur’an, pointing out that her husband, artist Sherif Salama, after marriage is much better before marriage because he became nicer, more gifted, and generally better.” 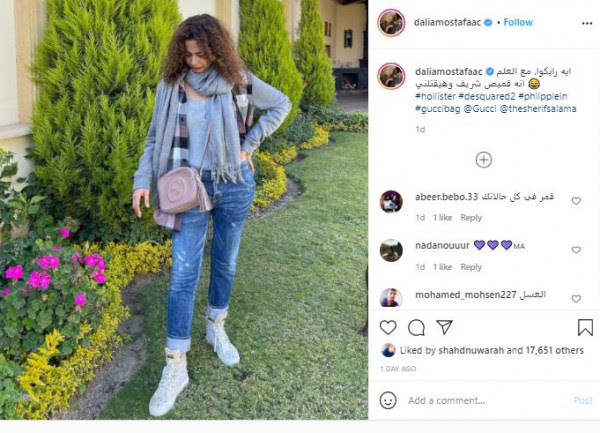 They saw .. the collapse of Belba and a number of artists at Izzat Al-Alaili’s funeral

Summary – Wizzo: My soul is presenting Fawazir, and the marital relationship in my imagination is Rouqah and Nour al-Sharif news

Darb al-Mallah .. Here is the son of the late Izzat Al-Elayli .. know the story

Urgent .. Manal Salama recounts her experience with harassment “and strangling is near”

The teaser for “The Shantah” was launched by Bayoumi Fouad

On Nahid Yusri’s 72nd birthday, films are unavailable without a boss

Michael Douglas remembers his father’s death with a picture of memories: “I can’t believe a year has passed without you”

10 films by the late Ezzat Al-Elaili among the top 100 Egyptian films .. Video

Houria Farghali, her condition is dangerous and the doctor stopped the operation

Amr Diab meets his first fiancee, and this is what he...

The first comment from the governor of Dakahlia, after confirming his...

Al-Ahly reaches an agreement to terminate Geraldos contract, in anticipation of...

Who is Pecan, who shocked Ronaldo in the world equal to...