According to the leaked figures published by the Spanish newspaper “El Mundo”, the value of the 33-year-old Messi contract amounts to 555,237,619 euros, or the equivalent of 673,919,105 US dollars, as a maximum over a period of 4 seasons, and this means more than $ 167 million per season.

The amount also includes a fixed salary, photo rights and variables, in addition to the tax that Barcelona had to pay, and the contract included a registration bonus of $ 139,854,228 for accepting the renewal, and a “loyalty” bonus of $ 94,587,405..

Messi, a 6-time Ballon d’Or winner, tried to leave Barcelona last summer by trying to activate a clause in his contract allowing him to leave for free, but after threatening to take legal action, he made a dramatic turn to continue at the club, at least until the end of his contract in case he did not agree. The parties to renew.

The Spanish newspaper “El Mundo”, sparked a surprise of a heavy caliber, by leaking a copy of the last decade signed by the Argentine star Lionel Messi, Barcelona captain, with the Catalan team in 2017, and will continue until June of this year 2021, which reveals that the legend has obtained more than For 555 million euros during this period. 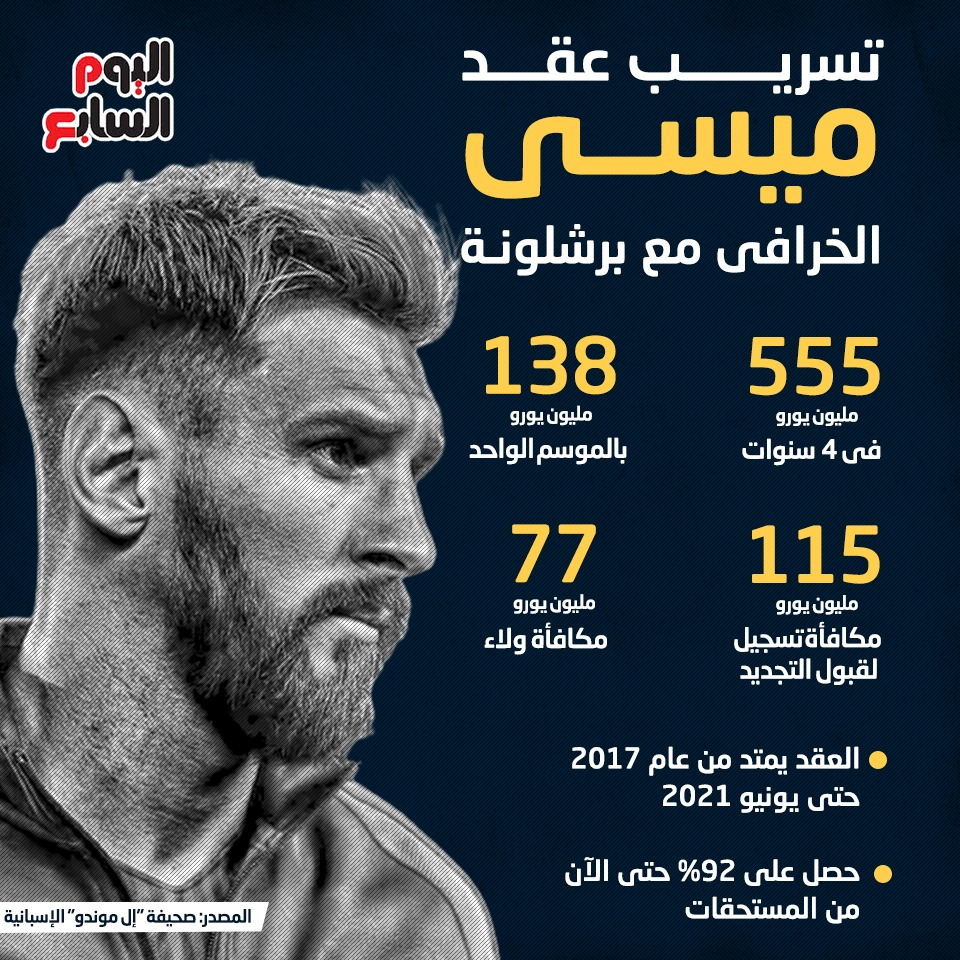 Leaking of Messi’s contract with Barcelona

The Spanish newspaper leaked exciting details of Messi’s contract with Barcelona, ​​and its cover title came, “The Pharaonic Decade That Destroys Barcelona,” explaining that the Argentine star signed a contract to receive about 138 million euros per season, an amount divided between fixed and variable.

The leak of Lionel Messi’s contract has become the talk of the world over the past hours, making the player threatening to sue the newspaper.

The newspaper reported that Messi gets from the start of signing his contract in the 2017-2018 season until the end of his contract next June, more than half a billion euros, specifically 555.237.619 million euros, including the fixed salary of flea and image rights, in addition to a series of unpublished bonuses that Worth millions of allowances, and a series of other variants according to different goals.

The newspaper pointed out that Messi’s agreement with Barcelona included two clauses of basic installments, as he received 115 million euros for approval to renew his contract, in addition to a 77 million euros loyalty bonus, noting that the Argentine star has received 92% so far of the financial dues agreed upon. With Barcelona in his contract in 2017, despite the repeated failures of the Catalan team in the recent period.

Radwa El-Sherbiny denies her marriage: “I cannot be harmful … I...

Kuwaitis are demanding a relaxation of the ban on the possibility...

FilGoal | News | Minister of Sports: We will...

Officially .. Al-Ittihad of Alexandria announces the inclusion of Al-Ahly

Al-Badry announces the list of Zamalek players today to join the...

Video After compromising his possessions, the two brothers, Ahmed Zaki, by...

“Radwan was killed,” the date of the premiere of the series...