“My first dream as a young boy was to be a gymnast, then I found out that I could play football, and I think that helped me a lot to get leaner when I decided to take football more seriously” – Marco van Basten.

Because of his ballet and his gymnastics and agility, Van Basten was known as “swan Utrecht“.

Attracted attention in Ajax and at the age of 23 joined the ranks of the Italian Milan, he started strongly after participating as a substitute and scored against Pisa, but an ankle injury caused him to be absent for most of the season.

Van Basten came back in time, scored against Napoli and led Milan to a 3-2 victory at San Paolo in front of Diego Armando Maradona, stripped the Partenobi of his title and gifted the Scudetto to Milan.

The season is over, and the Euro 1988 journey begins in West Germany.

Rinus Michels, captain of the Dutch mills and coach credited with the total football for which the Netherlands and Ajax were known in the 1970s, included Van Basten as the third striker in the 20-man squad.

Ajax striker John Bosman and Eindhoven striker Wim Kift were the first and second options at the expense of Van Basten, although everyone knew he was the best.

Cruyff replied:Not sharingHowever, Marco refused to heed Cruyff’s advice and decided to appear in the tournament.

Van Basten was satisfied with sitting back up, telling UEFA.com: “Sitting on the bench wasn’t a problem because I didn’t see any reason to think I should be a starter, just waiting for the moment if I had the chance.“.

He participated as a substitute against the Soviet Union in the first round, and the Netherlands lost by one goal in return.

Everything changed in the second round

Against England, Van Basten started and showed his true face in front of the Three Lions, scoring a hat-trick in 41 minutes.

In the next match, the Netherlands won 1-0 against the Republic of Ireland and won the second place and qualified for the semi-finals.

At Volkspark Stadion in Hamburg, the Netherlands met West Germany.

A confrontation that was always characterized by the rivalry and excitement between machines and mills.

Luther Matthaus advanced in the first half with a penalty kick for the hosts, but Van Basten took care of everything in the second half.

You get a penalty kick, Ronald Koeman hits the net, announcing the equalizer 16 minutes before the end.

And in the 88th minute, Van Basten stopped the crowd’s hustle with the fatal victory.

Van Basten tells UEFA.com:The match in Hamburg was a very special match for us because beating Germany, especially at home, is not something that happens often“.

The Netherlands responded to their loss to Germany in the 1974 World Cup Final.

And now she must respond to the loss in the round to the Soviet Union.

Ruud Gullit scored Holland’s first goal in the first 45 minutes, and in the second half, things went slow until the 54th minute.

Arnold Moren, then 37, sent from the left side a cross to the far right of the Soviet penalty area, she passed everyone and only found Van Basten.

“I was a little tired, and the ball came and I was thinking, OK, I can stop it and try to dribble the defense, or do it the easy way, take a risk and shoot.“.

“You need a lot of luck in a shot like this, everything went well, it’s one of those things that happen sometimes.“.

🗣️ “I was thinking, OK, I can stop it and do things with all these defensive players or I could do it the more easy way, take a risk and shoot.”

Van Basten’s agility, despite his height thanks to gymnastics, helped him score several goals in this way, but his goal against Rinat Dasayev remains a mark of Euro 1988 and the history of the tournament.

Van Basten won the top scorer award with 5 goals, and led the attack of the perfect formation for the tournament. 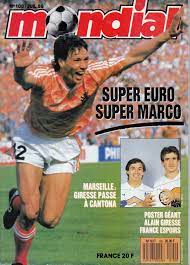 In December 1988, he won the Ballon d’Or award for the best player in Europe

19 matches for Milan in the 1987-88 season and a decisive goal from only 8 he scored with the Rossoneri, and 5 goals in 5 matches in the Netherlands shirt contributed to winning the Golden Ball out of 3, as he will maintain the title in 1989 and 1992 before retiring at the age of 28 years in 1994 due to ankle injuries.

“Van Basten left nothing for the striker. He is a classic scorer, an inspiring scorer and an iconic scorer“.

“Van Basten is neither better nor worse than Eusebio or Gerd Muller, who preceded him on the scoring lists. He adapts perfectly to football, in a time of scarcity of goals, the attacking match of skill and daring, symbolized by a wonderful fire kick against the Soviet Union in the final of the European Championship 1988.”

After Ronaldo.. video | Pogba incurs a liquor company huge losses due to the France-Germany match conference

5 exciting details in Sassi file in Zamalek .. “a promise that was not fulfilled and a visa that hindered his return.”

Summary and goals of the Turkey national team match against Wales in Euro 2020 .. Video

The expected formation of Zamalek against Aswan in the league .. “A surprise from Carteron”

Sponsors crises turn from the drama of Ronaldo and Pogba to the comedy of the coach of Russia..photos

Zamalek channel for the masses: Soul donate a pound

FilGoal | News | The announcement of the three...

After the “historical breakaway” reports, he revealed “the likely destination” to...

From price to advantages. A leak reveals everything about the...

Beginning in February, the WhatsApp application was stopped on millions of...

Salah: I am in contact with Al Somah … my relationship...

Zamalek doctor: The condition of the quadriplegic patient with corona is...