In the South American World Cup qualifiers for the 2022 World Cup, you feel that everyone except Brazil and Argentina does not want to decide their fate except in the last rounds.

In the current international break, 3 rounds were held, the 11th, 12th and the fifth postponed from last March.

Here are the highlights of the 2022 World Cup qualifiers for South America.

A goalless draw settled Uruguay and Colombia in the qualifiers, a match that saw a boiled goal by Luis Suarez, while Duvan Zapata missed the most dangerous chances of the match from inside the six-yard area, hitting the hand of Uruguay goalkeeper Fernando Muslera.

In Paraguay, the hosts managed to snatch a valuable point from Argentina with a negative draw, a match after which the Argentine national team complained about the excessive violence of Paraguayan players.

After the match, a Paraguayan fan slipped onto the pitch and took a picture with Lionel Messi, and even greeted the fans, accompanied by his country’s players, without noticing the security men. 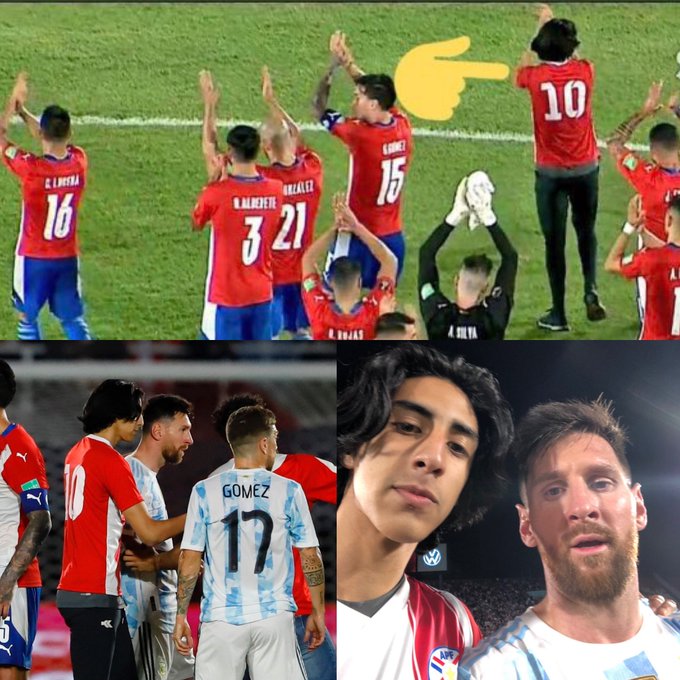 With difficulty, the Brazilian team returned with a valuable victory after overturning its delay against Venezuela to win, a match in which Rafinha overturned the situation after making two goals for Marquinhos and Anthony, to end the match with a victory for Brazil in the absence of Neymar, 3-1.

Peru punished Chile with a 2-0 win, while Ener Valencia became Ecuador’s all-time leading scorer after reaching the 33rd goal in his career with the national team when he led Tricolor to a 3-0 victory over Bolivia in a match that only scored goals in 5 minutes.

In La Paz, Bolivia was able to take advantage of the lack of oxygen and beat Peru 1-0 in the 83rd minute.

Venezuela, after the loss from Brazil, returned and beat Ecuador, 2-1.

In Barranquilla, Colombia halted Brazil’s winning streak of 9 consecutive matches after Los Cafeteros imposed a goalless draw in a match that witnessed the brilliance of captain David Ospina.

A match that witnessed the participation of Thiago Silva in his 100th match with the Brazilian national team.

Neymar also became the fifth player with the most participation with the Brazilian national team, with 114 games, surpassing the legend Pele, who has 113 international matches.

With ease, Argentina defeated Uruguay 3-0 in the La Plata derby, as Lionel Messi beat his former teammate Luis Suarez at the Monumental Stadium.

Messi opened the scoring and became the first player in the history of South American teams to reach the 80th goal, and the exciting thing is that he scored 40 goals in the first half and the same in the second half.

Chile managed to hold together again by winning a double without a response against Paraguay with goals from Ben Pererton and Maurizio Isla, who scored in 3 minutes.

Bolivia took advantage of the ground factor again, and this time swept its guest Paraguay 4-0, a match that ended with the dismissal of Eduardo Berzzo from his position from the Alberuja.

In a match that lasted 109 minutes and 59 seconds and played only 44 minutes, another clash between Colombia and Ecuador ended in a negative tie, in a match that saw a goal disallowed in the 90 + 11 minute due to a handball on Yerry Mina, the Colombia defender.

Los Cafeteros scored a third goalless draw in a row without conceding the first goals in the current international break.

Uruguay continued to fall, and this time they lost to Brazil 4-1 in a match that witnessed great brilliance from Rafinha, who scored a double.

Luis Suarez’s goal against Ederson ended a streak in which Samba kept a record 9 clean sheets in the qualifiers in a row.

Neymar also reached his 70th goal with the Brazilian national team, and he needs 8 goals in order to become the historical top scorer for samba, superior to the legend Pele.

Tite became the fastest coach in the history of South American World Cup qualifiers to reach 20 wins out of 23 matches he played.

On the other hand, Chile achieved its second consecutive victory by defeating Venezuela 3-0.

In Monumental again, Argentina beat Peru 1-0 in a match that saw Jefferson Farfan participating in his 100th match with Peru and receiving a penalty kick, but the crossbar was for Emiliano Martinez to stop Yoshimer Yotton’s shot.

Argentina has been unbeaten since losing to Brazil in the 2019 Copa America semi-finals, and since then the Tango has not lost in 25 consecutive matches under the leadership of Lionel Scaloni.

The Brazilian team is in the lead with 31 points from 11 matches, followed by the Argentine team with 25 points, and the two teams are scheduled to meet in El Clasico next month, although we do not yet know the position of the first-round match awaiting FIFA’s decision.

Ecuador rose to third place with 17 points, and Colombia and Uruguay did not take advantage of the situation, as both remained in fourth and fifth places, respectively, with 16 points.

Chile regained a glimmer of hope by reaching the 13th point, and the same thing for the Bolivian team, which reached the 12th point, leaving the bottom of the standings to seventh place.

Paraguay relegated to eighth place with 12 points, behind by one point, Peru, while Venezuela are at the bottom of the standings. 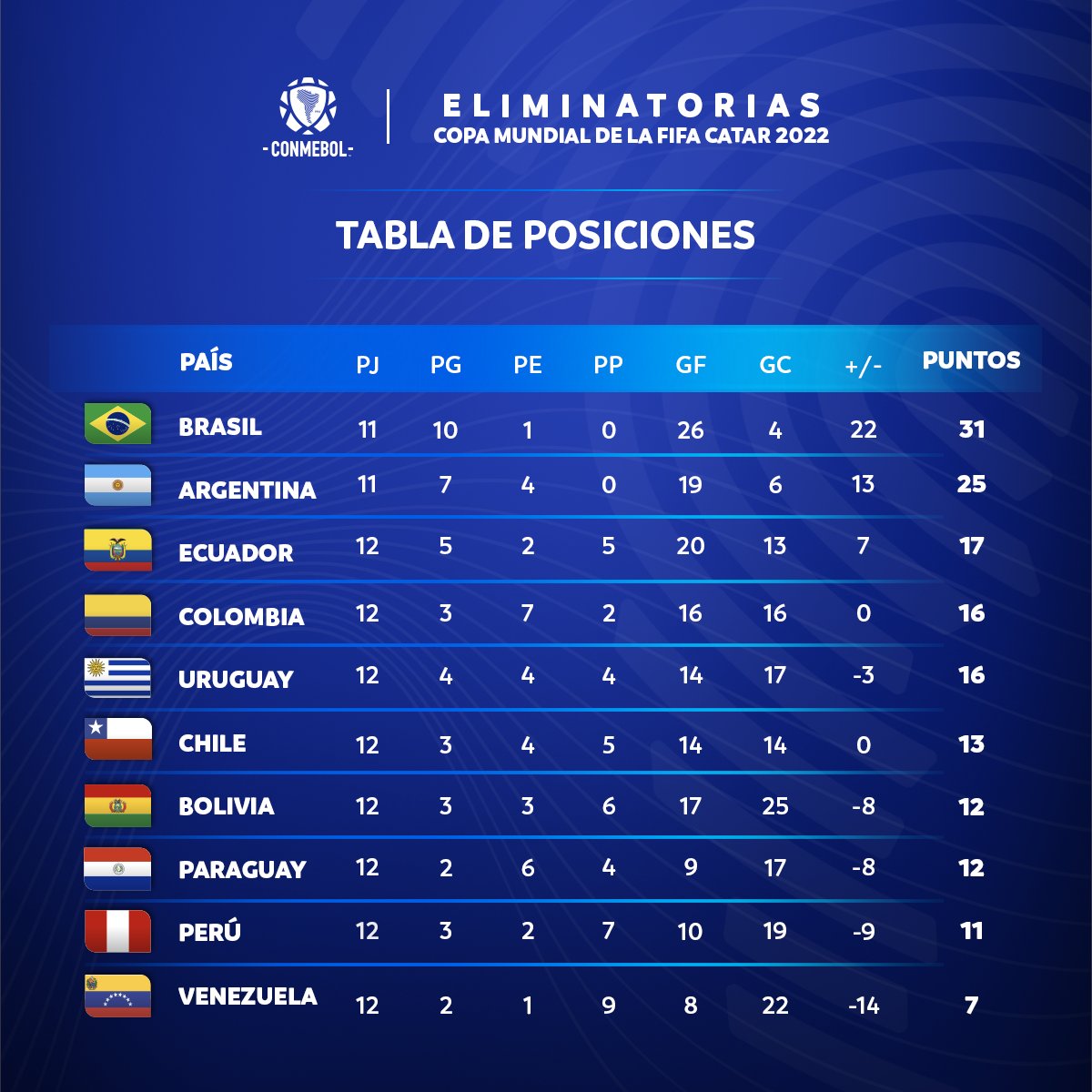 Brazil needs one win in order to officially qualify for the World Cup, as 34 points means reaching the World Cup.

While Argentina needs 9 points from the remaining 7 matches to reserve its place.

The rest of the teams have to be decisive, especially in the next international break, as the matches will be in a six-point character. Whoever wins will move away and stop his opponent.

Approaching 30 points means direct access to the World Cup, while less than that means competition for playoff seats, so now there is no stopping the bleeding of points.

Al-Ahly’s next meeting in the league determines the winter deal.. And On Sport raises Al-Ahly’s ridicule because of electrification – AhlyNews.com

The goals of the match Future and Talaa El-Jaish today

What did Al-Ahly do in 6 matches in the Egyptian League before the league stopped?

Osama Ibrahim on his goal in Al-Mokawloon: Maqsood and recorded in the same way before

FIFA: Mohamed Salah is in the list of the most participating players in major tournaments during a year

Ghaly is approaching a new and influential position in the Al-Ahly football team, after his success in the elections – Al-AhlyNews.com

Khaled Jalal: The expulsion of the contractors player contributed to the victory of Al-Ahly Bank in the meeting

Murtaza Mansour in response to the Olympic Games: I have immunity...

Who is accused of killing her mother during the day in...

We will not accept the insult .. Aswan club supports Shikabala...

Elisa is competing with Ruby for the wheel … Why do...

“A government separate from reality” … demonstrations in Israel

Omar Kamal responds to Hama Beka: You do not know what...

The story of Samir Ghanem’s marriages … a Somali woman and...